Well last Saturday was a busy – yet very fun – day as I performed at two different events. Fortunately these were only a couple of miles away from each other and I had plenty of time to travel between the two. (I even managed to stop off to grab a bite of food, get myself cleaned up arrive at second one early).

The first event was the wedding of Jo and Rob at Norton Park Hotel, near to Winchester, Hampshire. It is a great venue that I’ve worked at quite a few times before. 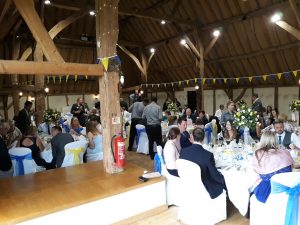 I had been booked by Jo as a surprise for Rob. They had attended a wedding earlier this year in Newcastle and saw a magician there. Rob really enjoyed it and thought it would be a good idea to have a magician to entertain the guests at their coming wedding. Jo told him it wasn’t a good idea and wouldn’t fit with their day. Of course, in the background she was secretly contacting me to surprise Rob on the day.

I couldn’t just spend my time entertaining Rob and Jo (although Rob wouldn’t have minded that) and circulated with the guests. I have to say that not only did I ensure the top table were regularly visited, I went around all the other tables and ensured that everyone got involved – and even managed to get to some tables a couple of times. My repertoire has a variety of different tricks and difference styles so it was nice to vary what I performed around the tables, but ensured that there was enough similarity so that guests to compare later on in the evening.

Just a couple of days later I received the following email from the newly-weds:

Well what can we say?!

You were amazing!!! I have had such great feedback about your magic, you were a huge talking point throughout the whole evening!!!

Rob is still in shock and continues to try and work out how you do each trick, hahaha! Seeing everyone’s faces either laughing, smiling, or confused will be a memory forever.
Thank you so much once again.

Once I left Jo, Rob and their guests it was only a short trip down the M3 to Totton, Southampton.

Next was a private party for Karl to celebrate his 40th birthday. I’ve been to quite a few 40th birthday celebrations over the last few months (including last weekend when I was Leighton Buzzard for a 40th party), which is quite a coincidence as I celebrated my own not that long ago. Actually, I grew up not very far from Totton so was half expecting to see some familiar faces there. I didn’t but it turns out one of the guests has a few friends in common with my father – and it’s likely they probably know each other.

A little like Jo booking me as a surprise for Rob, I was booked as a surprise for Karl by his wife Zoe. And again, although I entertained the “guest of honour” at the party, I also mingled with the rest of guests. Fortunately summer is continuing and most of the guests were outside.

It was great fun circulating with all of the guests and I really didn’t realise just how quickly the time flew by when I was there. All of the guests were up for having a good time and really embraced the magic, getting really involved and calling me over so much so that I had a tough time remembering where I was going and who I was performing to next.

I would have no hesitation in recommending Robert to anyone for an event. He attended my hubby’s 40th birthday party this weekend. He was engaging, entertaining & quite frankly amazing. All our guests were blown away with his magic & what a lovely man.

Highly recommend him. Thank you so much for Saturday you were awesome.

If you are looking to surprise groom, husband or just make sure you guests see some great magical entertainment please drop me an email or complete the contact form, and I’ll get back to you with all the information.