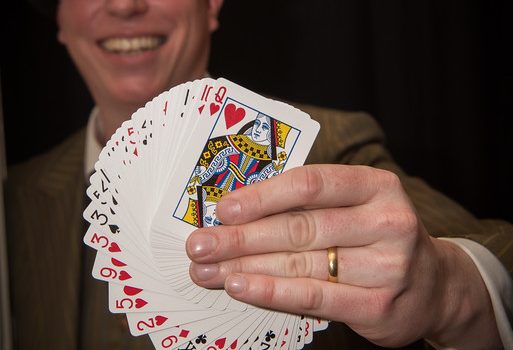 I had a great time performing at Albion House’s (at Nottingham University) annual gala dinner. It was an Alice In Wonderland themed event – so naturally I performed at my (slight) alter-ego: The Magic Mad Hatter! 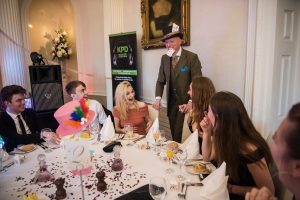 The evening was at Colwick Hall, which is close to Nottingham Race Course. I started performing magic for the guests as they arrived at the reception, then continued around the tables. This way they were kept entertained through-out, but then after dinner they would be watching fire-dancer perform, before finishing the night off dancing to the disco – hopefully without any fire!

My take on the “Mad Hatter” is taken from reading the books by Lewis Carroll, and of course some of the illustrations that accompany the original text. However, I have tried to give my “Mad Hatter” it’s own original twist – without being swayed by Disney or Johnny Depp! This way, if other guests come in fancy dress I’ll still look unique. 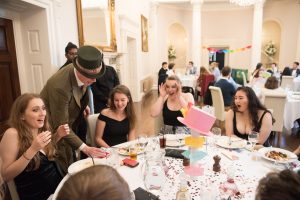 Whilst performing I had the pleasure of working with Tim of Elwood Photography, based in Nottingham. We worked together well and it wasn’t long before he picked up my style of working and would situate himself in a position to get the best possible photograph. For those wondering, I consider the best photographs aren’t of me or the trick I’m performing, but capturing the reaction it gets. However, it should be framed in a way that gives the picture context so that a viewer can still see what’s happening, even if they weren’t there to see the trick themselves. 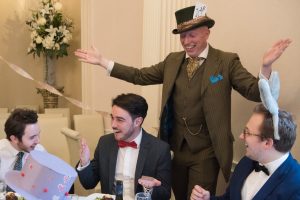 I think Tim captured it well and the member’s of Albion House will have some fantastic photographs to look back on to remember the night – and no doubt it will rekindle some of the experiences they had.

Find out more about Elwood Photography at www.elwoodphotography.co.uk.

A few days later I also received an email from Katie who organised the event:

I just wanted to say a huge thank you for your performance at the Alice in Wonderland themed Albion formal on Sunday, you did a great job and I’ve had so many great comments about your work; you were very popular!

If you are organising an event (it doesn’t have to be Alice in Wonderland themed!) email [email protected] You can also find out more about Robert’s Mad Hatter character at www.magicmadhatter.co.uk.

See more at on the Videos page.
× WhatsApp Robert