Phew, last weekend was a busy one!

Starting on Friday evening I traveled up to a lovely small village near Leighton Buzzard, Bedfordshire for a 40th birthday celebration. Ben had the celebrations in a fantastic country pub; the sort where I had to walk around hunched over in the main bar to avoid hitting my head on the beams, though fortunately the party was in the function room out the back, and as it was warm sunny evening most of the guests sat outside to enjoy the late summer evening (and the hog roast!)

A couple of days later I received an email from Chris and Peter (Ben’s parents) who had booked me to add a magical surprise to Ben’s party.

Just a quick note to say thank you for Friday evening, everybody really enjoyed it, it did put another dimension on the gathering. 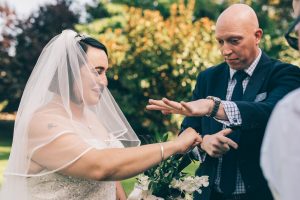 On Saturday went The Riverside Marquee which in Bray, a lovely village next to the River Thames near to Windsor in Berkshire for Becca and Chris’s wedding. I was booked by Becca’s mother, Janet, who saw me at a party near Newbury last summer. The bride arrived by boat and the ceremony was under a large marquee on the lawn. Following the ceremony there was an opportunity for guests to have a canape and a glass of drink whilst the group photos were done.

Then the guests were rounded up and all boarded the boat, where I had a captive audience whilst we spent an hour on the River Thames. This ensured that no-one could get away and everyone had plenty of opportunity to get involved with the magic, before returning to the Riverside Marquee where the guests could get back to dry land and the wedding breakfast could commence.

A few days later Janet dropped me an email, as well as great photo of me performing for Becca and Chris whilst they were waiting for all their guests to be seated.

I can’t thank you enough for your amazing contribution to my daughters wedding. EVERYONE thoroughly enjoyed your talents and some people asked for your contact details so who knows what might happen in the future.

It was great that you were able to mingle and fit in without needing introductions from me; you got on with the job which was great  as I couldn’t organise one more thing – I was completely worn out.

It all turned out great thanks to your professionalism and everyone was wowed by your magic and mind reading.  Sorry if a few bad words crept in!!

I do feel you have been exceptionally patient and understanding with us on many fronts (changing times etc) so a big thank you for being accommodating.  Not everything went to plan but your flexibility helped us along no-end.

I look forward to the next time I see you and your magic.

And then on Sunday I was off to the wedding fair at Donnington Grove near Newbury – coincidentally just a couple of miles from where Janet saw me at the party last year. As the recommended magician to Donnington Grove I regularly perform at weddings there, and it was nice to meet plenty of brides and grooms who have their wedding booked there (or looking to have their wedding there).

As an additional surprise it was good to see Andi and Sarah who popped in to say hello. Although they live near Newbury, it was the first time I’d seen them since I performed at their wedding in Glastonbury Town Hall a few years ago. It was good to hear that many guests still remember and talk about the magic I performed there year later!