Last weekend was another busy weekend (it’s fair to say it’s been a very busy September, well it’s been a busy year). Although technically my weekend started on Thursday morning.

Starting on Thursday morning (yes, Thursday morning!) I entertained at Shirley’s 60th birthday celebration. Shirley helps run a group for retired people in the village of Odiham, near to Farnham and Basingstoke in north Hampshire. Although they get together weekly Shirley realised she was already going to be meeting up with all her friends that morning anyway, so turned the meeting into her party. 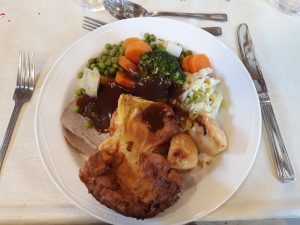 Shirley had already told them it was going to be a party atmosphere and quite a few attendees wore fancy dress – though I wonder what the shoppers on the streets of Odiham must have thought see them walk through the village at 10:30am! Shirley, however, hadn’t told them that there would be magical entertainment. I first mingled with the guests as they arrived and took their seats, and as more people turned up I could go back to groups to find new faces to get involved.

Following the close-up magic I performed a short cabaret for the whole group, and when I finished lunch was served. I was invited to stay and as everyone was eating roast beef (with Yorkshire pudding!) I couldn’t really say no. Over lunch I continued talking with the guests and did a few impromptu demonstrations of mind-reading with Shirley’s husband Michael, who was just innocently walking past at the time!

Later that day Shirley sent me a thank you email. And within a couple more days contacted me again to let me know people were so impressed they want to book me for their Christmas party in December, which is now all booked in and I’m looking forward to seeing them all again in a couple of months.

Thank you doesn’t come anywhere close to conveying our debt to you. You really did make the proceedings go with a swing. I’m already looking forward to next Thursday as I know the feedback from your entertaining us will be amazing.

I am sure our paths will cross again but for now thank you so much for making my party very special.

With best wishes & kind regards from both of us Shirley

On Friday I performed at a wedding at The Old Mill in Aldermaston. The Old Mill is a great venue that I have been to many times over the years, and as an added bonus to me: it is very (very!) local. So much so that I regularly have to drive passed it to get to other bookings (that are sometimes hundreds of miles away), so popping “round the corner” is always welcome.

I was booking by Lucy and Anthony who first saw me at Ufton Court, another local venue. The weather had been a bit grey with a few light showers that day, but fortunately when I arrived the shower eased off as I entered the car park, and by the time I’d prepared myself and the ceremony had finished the clouds had parted and the guests spilled out onto the lawn.

I mingled with the guests whilst Lucy and Anthony had their photographs, but ensured that both Lucy and Anthony got involved too. When the guests were called to dinner they had a receiving line so after a while I continued entertaining around the tables to keep those already sat entertained, but making sure I got out the way before the bride and groom were formally introduced.

Saturday was a day of weddings in Hampshire, and in both cases I was booked because I had performed at previous family weddings.

The first was at Weybrook Park Golf Course, just on the outskirts of Basingstoke, Hampshire. It’s a venue I’ve been to before, and though a little further away than Aldermaston, I still class it as local as it took less than 20 minutes for me to get there. That was quite fortunate as I arrived early, and discovered that the ceremony had run quicker than anticipated and the guests were ready to see some magic. Fortunately it only took a minute to sort my bits out before I cracked on. 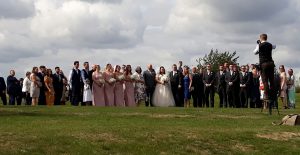 It was back to being an almost summer day, despite being mid-September, and many guests enjoyed the sunshine outside whilst James and Becci posed for their photographs. When the guests were called to the wedding breakfast there was no receiving line so I just held back for a minute whilst they were formally entered. I then continued around the tables. This was more of an “afternoon tea” rather than the traditional “three course meal”. This gave me plenty of opportunity to focus on the top table to ensure that those who were off doing photos all didn’t miss out.

Debbie (who booked me for her own wedding last year, and so booked me on James and Becci’s behalf) dropped me an email to say thanks a couple of days later:

I just want to say thank you for your great display of magic at James and Becci’s wedding on Saturday.

Once again you were very entertaining and their guests were really impressed. Everybody enjoyed taking part with you.

We will definitely recommend you if we hear of anyone wanting a magician in the future.

The second wedding on Saturday was Sian and Ben’s wedding at Lainston House, near to Winchester. It was the first time I’ve performed at Lainston House, but it’s a venue I’ve heard about so it was nice to get down to it. Again, Winchester isn’t too far away (I even managed to pop home for half an hour for a cup of tea and a clean shirt!) so got to it early.

On arrival I was informed that the day was running late – by about an hour – and the guests were just finishing the main course. I had been booked to entertain the guests in the period when the room needed to be cleared and the band could set up. However, I asked a few more questions and discovered that the speeches had already been done before the meal was served. Therefore, instead of waiting around for an hour, I started early and entertained around the tables.

Of course, I avoided tables where staff were clearing plates, serving desserts or guests were eating. But with about a dozen tables this was easy enough, and ensured that guests didn’t even realise things were running behind schedule. Once evening guests arrived I ensured they were integrated as I mingled outside whilst the band were frantically setting up and sound-checking inside.

Once the first dance was over people were dancing inside so it was time for me to leave, and relax! 😉